In a healthy eye, a clear liquid called aqueous humor circulates inside the front of the eye. To maintain a constant and normal pressure in the eye, it continuously produces a small amount of aqueous humor, while an equal amount of the liquid leaves the eye. If you have glaucoma, the aqueous humor does not flow out of the eye properly. The pressure of the liquid remaining in the eye increases and, over time, causes damage to the fibers of the optic nerve.

Glaucoma can cause blindness if left untreated. Only one-third of the estimated three million Americans who have glaucoma are aware that they have the condition. Generally, when glaucoma develops it does not present any early symptoms and the disease progresses slowly. This way, glaucoma can steal your sight gradually.

Fortunately, early detection and treatment of glaucoma (either with eye drops, glaucoma surgery, or both) can help preserve your vision.

The most common form of glaucoma is called open-angle primary glaucoma. It occurs when the trabecular meshwork of the eye gradually becomes less efficient in draining fluid. As this happens, the pressure of the eye, called intraocular pressure (IOP), rises. Increased pressure in the eye causes damage to the optic nerve, which can occur with different intraocular pressures in different patients. Your ophthalmologist (eye doctor) establishes the ideal pressure that the eye must have to prevent further damage to the optic nerve. Each patient has a different ideal pressure.

Half of the patients with glaucoma do not have a high eye pressure when they are examined for the first time. That’s why it is essential that the optic nerve is examined by an ophthalmologist for a proper diagnosis.

The eye pressure is measured in millimeters of mercury (mm Hg), the same unit of measurement used by barometers that measure climatic conditions.

On the contrary, an eye hypertension is a condition whereby someone has a higher pressure in the eye than normal, but has no other signs of glaucoma, such as optic nerve damage or blanks appearing in the peripheral vision (lateral) when a test is done. A person with ocular hypertension is considered to be “suspected of glaucoma” because they may be at risk of developing glaucoma in the future. Like people with glaucoma, people with ocular hypertension should be evaluated closely by an ophthalmologist to make sure they receive the proper treatment.

Angle-closure (or narrow-angle) glaucoma is a less common form of glaucoma. Angle-closure glaucoma occurs when the angle of drainage of the eyes becomes blocked. Unlike open-angle glaucoma, intraocular pressure rises very fast. The pressure increases when the iris (the colored part of the eye) blocks the drainage angle partially or totally. People of Asian origin and those with farsightedness (distance vision) tend to be at greater risk of developing this type of glaucoma.

If the drainage angle is completely blocked, the eye pressure increases rapidly resulting in an angle-closure glaucoma attack. Symptoms of an attack include:

Congenital glaucoma is a rare type of glaucoma that develops in infants and young children and can be hereditary.

Secondary glaucoma is derived from another condition or eye disease. For example, an injury to the eye, a long-term steroid therapy, or a tumor may cause secondary glaucoma.

Causes of glaucoma include elevated eye pressure (called intraocular pressure or IOP) due to the eye’s inability to drain fluid efficiently.

A clear liquid called aqueous humor circulates inside the front part of the eyes. To maintain a constant pressure in a healthy eye, the eye continuously produces a small amount of aqueous humor, while the same amount of this liquid leaves the eye. The fluid flows through a very small drainage called the trabecular meshwork, a complex network of cells and tissues in an area called the drainage angle. 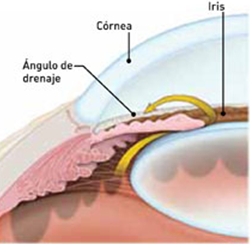 If the drainage angle is blocked, excess fluid cannot flow out of the eye, causing fluid pressure to increase.

When glaucoma is present, the aqueous humor doesn’t flow through the trabecular meshwork properly. If the drainage angle becomes less efficient in draining fluid, as in a common open-angle glaucoma, excess fluid can’t escape the eye properly, causing intraocular pressure (IOP) to rise. Over time, elevated IOP causes damage to nerve fibers. If the drainage angle is completely blocked, the pressure of the eye rises rapidly, resulting in a closed or narrow angle glaucoma attack, which causes pain in the eyes and forehead, nausea and vomiting. An angle-closure glaucoma attack is a medical emergency and should be treated immediately.

Some people have normal-tension glaucoma, or low-tension glaucoma. Eye pressure is always less than 21 mm Hg, but damage to the optic nerve and loss of visual field can still occur.

Congenital glaucoma is a rare type of glaucoma that develops in infants and young children. It can be hereditary, and occurs when the eye drainage system does not develop fully or correctly before birth.

If you have been diagnosed with glaucoma by your eye doctor, your doctor will discuss possible treatment options for glaucoma, such as glaucoma drops and / or glaucoma surgery.

Only half of people who have glaucoma are aware that they have the condition. When glaucoma develops, it usually has no early symptoms. This is why glaucoma can “steal” your sight gradually.

In its early stages, open-angle glaucoma presents no obvious symptoms. As the disease progresses it produces more damage, blind spots develop in peripheral (lateral) vision. These points may go unnoticed until the optic nerve has been severely damaged, or until it is detected by an ophthalmologist during a complete examination of the eyes.

People at risk for developing angle-closure glaucoma (also called narrow-angle glaucoma), which causes the eye’s drainage angle to block, usually do not show symptoms before an attack, although some initial symptoms may include blurred vision , halos, headache or mild eye pain. An angle-closure glaucoma attack includes the following symptoms:

People with “normal-tension glaucoma” may have their eye pressure within normal ranges, but they have signs and symptoms of glaucoma, such as blind spots in their field of vision and damage to the optic nerve.

Some people may not have symptoms of glaucoma, but may have higher than normal eye pressure (called ocular hypertension). These patients are considered as “glaucoma suspects”, and should be carefully evaluated by an ophthalmologist

One of the problems with glaucoma, especially open-angle glaucoma, is that there are usually no symptoms in the early stages. Many people who have the disease are not aware that they have it. That is why it is important to undergo eye exams done by an eye doctor, especially as you get older.

Your ophthalmologist will do the following tests during a thorough glaucoma assessment:

Measurement of eye pressure (tonometry)
The doctor measures eye pressure through tonometry (see image above). Examination of eye pressure is an important part of assessing glaucoma. A high blood pressure reading is often the first sign that you have glaucoma. During this test, your eye is numbed with eye drops. Your doctor uses an instrument called a tonometer to measure eye pressure. The instrument measures how the cornea resists pressure.

Usually, the normal eye pressure ranges from 10 to 21 mm Hg. However, people with normal-tension glaucoma can have damage to their optic nerve and loss of vision, even though their eye pressure remains consistently below 21 mmHg.

Treatment of glaucoma depends on the specific type of glaucoma, its severity and the response to treatment.

Medicinal drops are the most common way to treat glaucoma. These medicines reduce eye pressure in two ways: 1. decreasing the production of aqueous humor; Or 2. improving flow through the drainage angle.

The eye drops should be applied every day. Like any other medication, it is important that eye drops are applied regularly, as prescribed by your ophthalmologist.

Never change or stop taking your medicines without consulting your doctor. If the medication is running low, ask your doctor if it should be ordered again.

Surgery is recommended for some patients with glaucoma. Glaucoma surgery improves the flow of fluid out of the eye, resulting in low eye pressure.

During ALT surgery, a laser beam causes small burns, evenly spaced in the trabecular meshwork. The laser does not create new drainage holes, but it stimulates the drainage to work more efficiently.

During SLT surgery, a low-energy laser beam points to specific cells in the drainage channels (similar to a mesh or network), using very short light applications. Treatment reduces the eye pressure, comparable to an ALT.

Even if laser trabeculoplasty is performed correctly, most patients continue to take glaucoma medications after surgery. For many, this surgery is not a permanent solution.
Approximately half of those receiving this type of surgery develop increased eye pressure again over a five-year period. Many people who have had success with laser trabeculoplasty repeat the treatment.

Laser trabeculoplasty can also be used as a first line of treatment for patients who are unwilling or unable to use glaucoma drops.

Laser iridotomy is recommended for the treatment of people with angle-closure glaucoma and for those with a very narrow drainage angle. During this surgery, a laser creates a small hole the size of a pin head through the top of the iris to improve the flow of aqueous humor towards the drainage angle.

Icons made by SimpleIcon, Sebastien Gabriel from www.flaticon.com is licensed by CC BY 3.0